War Brides and Icebergs – The Story Behind The English Wife

One Sunday back in 1940, over Sunday lunch, my Aunt Stephanie, then still a teenager, met my uncle Gus Edwards, a Newfoundlander from Grand Falls, a paper town founded by Baron Northcliff in 1905 to supply his newspapers (which at that time included The Daily Mirror and the Observer and which would shortly include The Times) with a regular supply of newsprint.

Twenty-seven-year-old Gus was stationed with the 57th Newfoundland Heavy Regiment (later renamed the 166th Newfoundland Field Regiment), just outside of Fleggburgh, Norfolk. When not training on the new artillery guns, the Newfoundlanders spent their days building the concrete “pillbox” defences that you can still see dotted along the East Anglian coast. 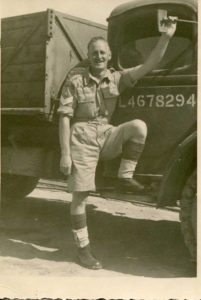 Newfoundland, at the time, was a dominion of Great Britain, like Australia, South Africa and Canada, with its own government, money, educational system and army. It didn’t become a province of Canada until 1949, when it was a close-run thing as to whether it would join Canada or the United States. Canada’s “carrot” of a Baby Bonus for each child swung the vote, though many Newfoundlanders dressed in black (my 17-year-old mother included) the day Newfoundland joined Canada.

Auntie Stephanie, just turned eighteen, and having recently graduated from St Leonard’s School for Girls down on the Sussex coast, was staying at her grandparents’ home in nearby Filby. Stephanie’s grandfather was the local vicar, and he and his wife thought it was only right and proper to invite one of the visiting soldiers, so far away from their home, to Sunday lunch each week. And that particular Sunday, Sargeant Augustus Andrew Edwards was the lucky recipient of the invitation.

Stephanie was a lively, pretty, and very strong-minded young woman, whom, after that first meeting with handsome Gus, a “reliable, likeable sort of fellow – not really the Sargeant Major type” according to one of his army colleagues, decided he was the man for her. And, the feeling was evidently mutual. They married in England shortly afterwards, and he brought her, as a war bride, to live in Newfoundland, a rocky island the size of Ireland on the far eastern coast of Canada, a place where winter can last eight months and the sea around the coast is known as Iceberg Ally.

Their meeting and Stephanie’s move from bustling Norwich to remote Newfoundland inspired me to research the stories of English war brides who’d left behind the families and their country to sail across the Atlantic, often with babies and toddlers, to join their American and Canadian husbands – 70,000 women emigrated to the US, and just under 50,000 left for Canada between 1945-1950. Many of them would never see Britain again. 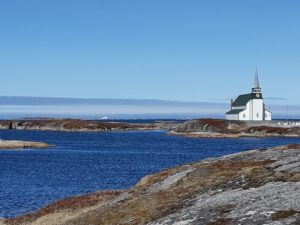 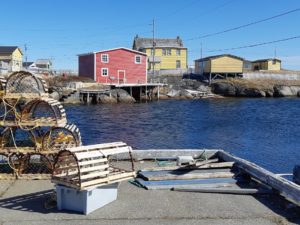 Rather than setting The English Wife in a town in central Newfoundland, I chose to have Ellie settle in Gus’s home village of Tippy’s Tickle, a fictional outport on the northern coast of Newfoundland. I spent a month in the spring of 2019 travelling around the north-eastern coast visiting relatives, photographing the colourful wooden houses and fishing boats of coastal villages like Trinity, Fogo, Greenspond and Newtown, and the breath-taking icebergs (one of which met with the Titanic back in 1912) which sailed past the coast like ships in full sail.

The response by the Newfoundlanders from Gander and the surrounding towns to take into their homes, gyms and halls over 6,500 stranded international travellers when their flights were diverted to the small airport at Gander on 9/11 was a story I heard early on from Newfoundland relatives, as I’d been born in the nearby town of Grand Falls-Windsor. The story is now, of course, the subject of the wildly popular musical Come From Away. Incorporating this event into The English Wife was my way of showing the deeply ingrained generosity and hospitality of Newfoundlanders to readers as well as to Ellie’s work-obsessed niece, Sophie, who wants nothing more than to get on the first plane to New York when her plane from London lands in Gander that September morning.

But then she meets Sam, and Ellie… and The English Wife begins. 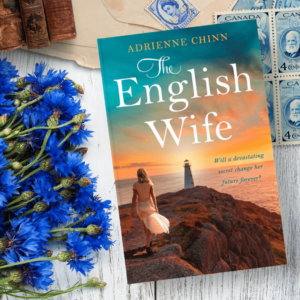 This prize draw is promoted by HarperCollins Publishers Limited (“HarperCollins”), 1 London Bridge Street, London, SE1 9GF. This promotion is open to all residents of the UK except employees of HarperCollins, (or their parent, subsidiaries or any affiliated companies) and their immediate families, who are not allowed… Read More

One More Chapter Readalong widget giveaway This prize draw is promoted by HarperCollins Publishers Limited (“HarperCollins”), 1 London Bridge Street, London, SE1 9GF. This promotion is open to all residents except employees of HarperCollins, (or their parent, subsidiaries or any affiliated companies) and their immediate families, who are… Read More

One More Chapter Readalong challenge competition This prize draw is promoted by HarperCollins Publishers Limited (“HarperCollins”), 1 London Bridge Street, London, SE1 9GF. This promotion is open to all residents except employees of HarperCollins, (or their parent, subsidiaries or any affiliated companies) and their immediate families, who are… Read More