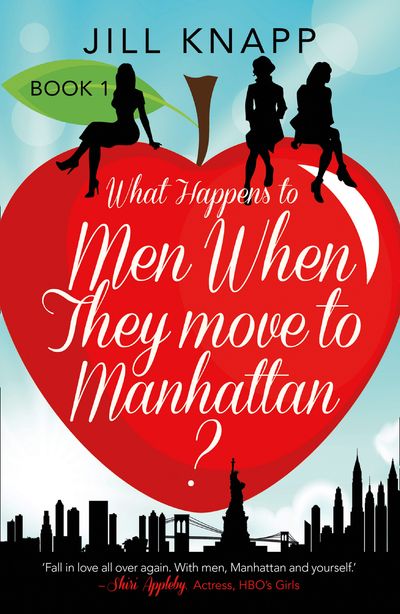 What Happens to Men When They Move to Manhattan?

“Searching for a new Carrie Bradshaw who’s on the hunt for her very own Mr. Darcy? You will want to curl up with What Happens To Men When They Move To Manhattan and fall in love all over again. With men, Manhattan and yourself.” – Shiri Appleby, Actress

Life in the city gives 23 year old Amalia Hastings a ride she is not expecting. As she tries to find her way on the little island that never sleeps, she discovers she has a harder time navigating through life then she does the streets of Greenwich Village!

She thought she had everything she wanted – a new apartment in Manhattan, a first-rate education at NYU, a group of trusted friends and Nicholas, a boyfriend who she once believed was her soul-mate. But somehow, it isn’t enough.

Stumbling through her relationships, Amalia encounters Michael. An attractive classmate who quickly moves from being one of her close friends, to an inconsistent friend-with-benefits. After all, the only thing consistent about New York is its beauty.

Amalia is essentially torn between two men, and Michael is torn between two women. Her best friend Cassandra is being strung along by her “boyfriend”, Bryce, and even her friend Olivia is having a secret relationship!

After getting terribly lost searching for love in all the wrong places, Amalia finds herself asking – what happens to men when they move to Manhattan?!

Author: Jill Knapp
Format: Paperback
Ageband: from 13
Release Date: 27 Jan 2015
Pages: 250
ISBN: 978-0-00-810499-3
Jill Knapp, a native New Yorker, is a former Professor of Psychology at her Alma Mater.She holds a Graduate Degree from The New School for Social Research in Manhattan hoping to become a Neuro-Psychologist. But creating stories has always been her true love. After a few years of writing for The Huffington Post, she wanted to branch out and began writing for other publications. Her next goal is to publish another novel. Jill now lives in the Southern part of The State with the cutest dogs you’ve ever seen!

”'A subtly addicting, fun, and fast-paced story about the realty of twenty-something dating in NYC” - Courtney Hamilton, Author of Almost Royalty.

”'A fast-paced roller-coaster ride through the giddy peaks and Death Valleys of dating in your twenties in the big city, looking for love, and finding yourself.” - Phoebe Fox, Author of The Break-Up Doctor

”'Chase is a fun ride through the streets of 20-something singledom in Manhattan, where love can often feel as elusive as an errant taxi cab. Jill brings a fresh new voice to the 'single & fabulous' or 'single & desperate?' debate, and you'll be rooting for her heroine, Amalia from page one. For any woman who has ever chased love only to find themselves…this book is for you.” - Mandy Hale, Creator & Author, The Single Woman

”'…Knapp Zitron's book combines love and life in a beautiful twist within the borders of one of the loudest, craziest cities in the world, New York City. But what's most interesting is how the characters find solace in the noise, find happiness in the chaos, and find love in the unique.” - Kate Avino, The Huffington Post and CEO of Her Culture magazine.

”'What Happens To Men When They Move To Manhattan? is a fun and enjoyable read about a young woman in search of her happily ever after. Take it to the beach or snuggle up in bed and dig in.” - Emily Liebert, award-winning author of You Knew Me When and When We Fall