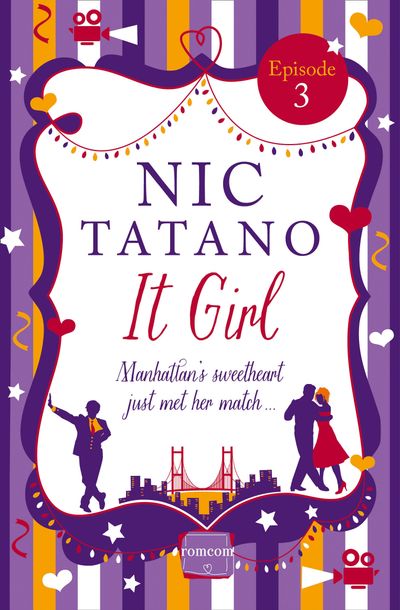 -Veronica discovers she’s definitely met her match in Dexter Bishop, and she’s ready to take him on:

“Yes, it’s quite clear you’re not some fair damsel in distress. You’re more like a damsel who causes distress.”
“Oooooh, I kinda like that, Dexter.”

-Our heroine is paired up with her dance partner, and not at all happy about the revealing “costumes” she’ll have to wear.

“He wants me to wear this?”
Bradley shrugged as I held up the electric blue spandex outfit that would no doubt make me look like Catwoman had escaped from a seventies disco. “You’ve got the body for it.”
“Thank you, but that’s beside the point.” Though it’s awfully nice that you noticed.

-Is the object of Veronica’s affection attached, or not?

His cell phone rang, interrupting my question. “Hang on a second,” he said, as he pulled the phone from his pocket. I stole a glance at the screen and saw the face of a spectacular blonde. “I gotta take this.”
“Sure,” I said, quickly reassuring myself that a guy who looks like this surely has some beautiful women in his life. She’s probably one of the other dancers.

Yeah, let’s go with that.

Author: Nic Tatano
Format: Digital download
Release Date: 13 Jun 2014
Pages: None
ISBN: 978-0-00-759579-2
I\'ve always been a writer of some sort, having spent my career working as a reporter, anchor or producer in television news. Fiction is a lot more fun, since you don\'t have to deal with those pesky things known as facts. I grew up in the New York City metropolitan area and now live on the Gulf Coast where I will never shovel snow again. I\'m happily married to a math teacher and we share our wonderful home with our tortoiseshell tabby cat, Gypsy.