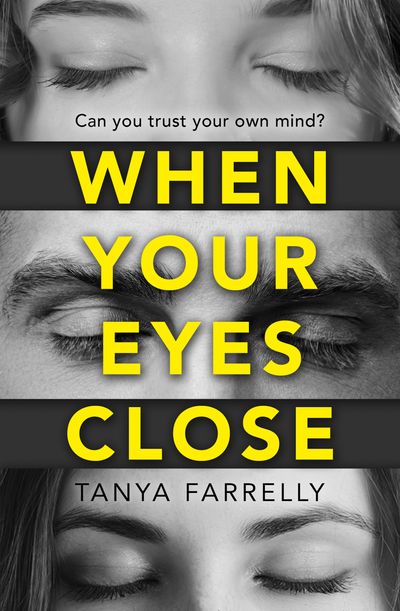 When Your Eyes Close

THREE LIVES ARE ABOUT TO CHANGE FOREVER…

Nick Drake is determined to get his life back on track. And if hypnosis has even a chance of working, he’ll give it a try. But as his eyes close, Nick sees something that terrifies him.

Michelle Carlin is Nick’s girlfriend. She’s determined to stick by Nick no matter what, but she can tell he’s hiding something from her, something dangerous.

Caitlin Davis is still reeling from the suspicious disappearance of her husband a year ago. But she has secrets of her own which could ruin her and everything she holds dear.

These three people’s lives are set to collide. And as long-buried secrets, lies and betrayals come to light, they will be lucky to escape unscathed…

Author: Tanya Farrelly
Format: Paperback
Release Date: 15/11/2018
Pages: 288
ISBN: 978-0-00-828003-1
Tanya Farrelly works as an EFL teacher and facilitates Creative Writing classes for South Dublin County Council. She holds a PhD in Creative Writing from Bangor University and her work has been shortlisted for several prizes, such as the Hennessy and the Francis MacManus Awards. In 2008 she was named runner-up in the William Trevor International Short Story Competition and her debut short story collection, When Black Dogs Sing, was published by Arlen House in September 2016. The Girl Behind the Lens is her first full-length novel.Tanya lives in Wicklow with her husband and runs a monthly Spoken Word event called Staccato.

When Your Eyes Close