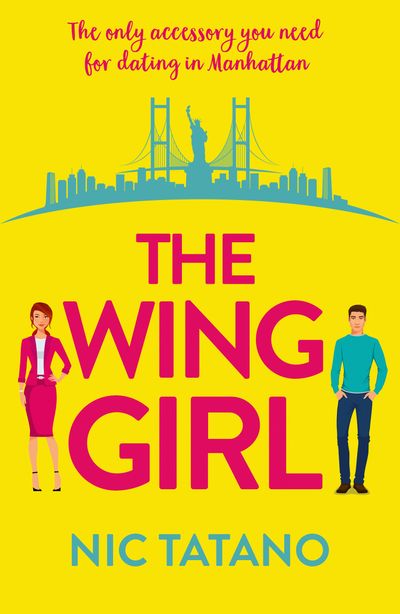 The laugh out loud rom com perfect for fans of The Hating Game and The Kiss Quotient!

1. A young, single woman frequenting liquor-serving establishments who attracts then later repels eligible men that re eventually picked up by her friends.

2. The essential accessory for dating in Manhattan.

For years guys have cruised bars using the “wing man” as a divide and conquer weapon designed to liberate a gorgeous woman from her not-so-beautiful friend.

She’s a kick-ass, take-no-prisoners investigative reporter fighting for truth, justice and higher ratings. But while her fame draws in the hotties, it’s unfortunate that you can’t buy a new personality at Bloomingdales!

Because up close and personal these unsuspecting suitors get fried by a snarky attitude that’s sharp enough to slice a stale bagel…which leaves her grateful friends to swoop in for the delectable leftovers!

Only enough is enough – isn’t it time for Belinda to stop taking one for the team and land her own Mr Right?

Author: Nic Tatano
Format: Digital download
Release Date: 29/08/2013
ISBN: 978-0-00-754858-3
I've always been a writer of some sort, having spent my career working as a reporter, anchor or producer in television news. Fiction is a lot more fun, since you don't have to deal with those pesky things known as facts. I grew up in the New York City metropolitan area and now live on the Gulf Coast where I will never shovel snow again. I'm happily married to a math teacher and we share our wonderful home with our tortoiseshell tabby cat, Gypsy.

The laugh out loud rom com perfect for fans of The Hating Game and The Kiss Quotient!

1. A young, single woman frequenting liquor-serving establishments who attracts then later repels eligible men that re eventually picked up by her friends.