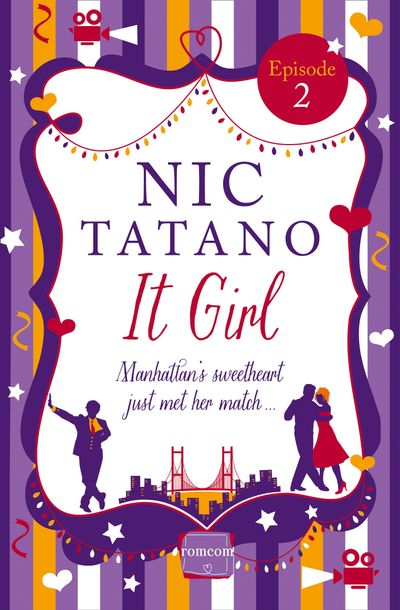 -Veronica gets called on the carpet, but will the viewers make the final decision as to her fate? Or will she take matters into her own hands?

“You know, snarky girl has had time to think, and she’s more than willing to tender her resignation—”

-She’ll meet the most eligible bachelor in the country, but she’s already judged this book by his cover:

“Anyone who works on a reality show has to be shallow,” I said.
“So dive into the pool, hit your pretty lil’ head and let the man give you mouth-to-mouth,” said Savannah.

-And, being sandbagged by her boss might actually pay dividends in the romance department:

If viewers were watching closely on a high-def flat screen they no doubt saw me gulp while I blushed like a high school girl.

My heart melted as the incredible guy named Bradley smiled at me and gently took both my hands.

Will our redheaded heroine get her wish and be paired with the guy she wants?

Author: Nic Tatano
Format: Digital download
Release Date: 10/06/2014
ISBN: 978-0-00-759578-5
I've always been a writer of some sort, having spent my career working as a reporter, anchor or producer in television news. Fiction is a lot more fun, since you don't have to deal with those pesky things known as facts. I grew up in the New York City metropolitan area and now live on the Gulf Coast where I will never shovel snow again. I'm happily married to a math teacher and we share our wonderful home with our tortoiseshell tabby cat, Gypsy.

-Veronica gets called on the carpet, but will the viewers make the final decision as to her fate? Or will she take matters into her own hands?

“You know, snarky girl has had time to think, and she’s more than willing to tender her resignation—”