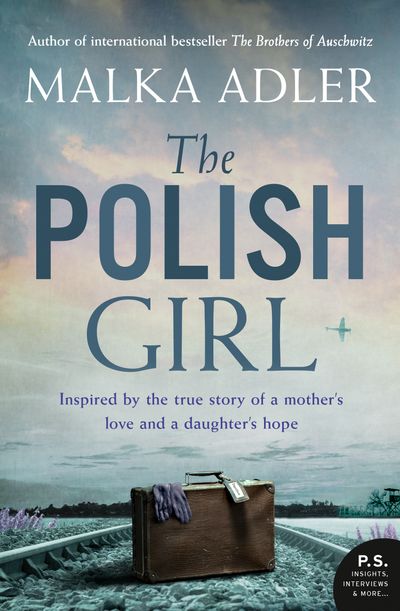 Winter 1939: Danusha and her family are forced to flee their home when the Nazis invade Poland. Danusha’s mother, Anna, changes her name and secures a position as a housekeeper in a German doctor’s mansion in Kraków where Gestapo meetings are hosted in the kitchen…

Her secret is their salvation, but what Danusha remembers most is the solitude, with only her baby brother and the girl in the mirror for company.

It is only years later, when their neighbours gather in the living room to hear Anna’s stories, that Danusha finally realises her mother was never a cold unknowable sea but a storm-wracked sky – sometimes bright, sometimes dark, and always watching over her.

The Polish Girl is a heartbreaking and unforgettable historical novel by the author of international bestseller The Brothers of Auschwitz – perfect for fans of Antonio Iturbe and Edith Eger.

Author: Malka Adler
Format: ebook
Release Date: 07 Jun 2022
Pages: None
ISBN: 978-0-00-852527-9
Malka Adler was born in a small village near the Sea of Galilee in northern Israel.She began her work as an author when she turned 50. After taking a creative writing course, she fell in love with the art.Malka has written six books, four of which are about the Holocaust. She obtained her undergraduate and graduate degrees in educational counselling at Bar Ilan University and is a family and couples\' therapist, writer and facilitator of several reading clubs.

‘I read The Polish Girl with bated breath and high emotion. Such a difficult story, written with such talent. Malka’s writing tackles the complex relationships within a family, conveying admiration with reservation, dependence with independence, attraction with withdrawal. Every book about the Holocaust is special in its own way, and this one is particularly unique. This is a rare story about survival in the very heart of the German regime and the mostly hostile Polish population. It is also the story of a Jewish family, sisters, brothers, and mother, who do all they can to help each other survive, even at the cost of their own lives. The Polish Girl combines the best of literary fiction with true accounts, adding another important piece to the mosaic that is the story of the Holocaust, which can never be told entirely.’Nurit Guvrin - emeritus professor of Hebrew Literature at Tel Aviv University -