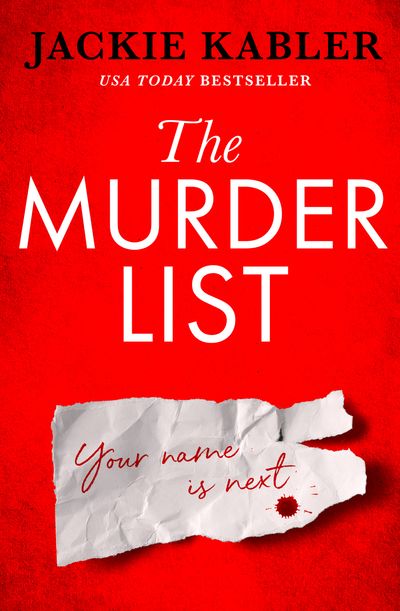 The brand new psychological thriller from the author of Am I Guilty, The Perfect Couple and The Happy Family

When Mary receives a blank diary as a present, she thinks nothing of it. Until she opens the diary, and sees it’s not blank after all…

Is this a sick joke? But…it’s the end of January now. And a woman called Lisa was murdered in Oxford on 1st January.

Could there really be a killer out there, planning to commit a new murder each month? And is the Mary due to be killed on 1st April her?

The clock is ticking for Mary to uncover the truth, before she becomes the next victim on the killer’s list…

Author: Jackie Kabler
Format: Digital download
Release Date: 31 May 2022
Pages: None
ISBN: 978-0-00-843399-4
Jackie Kabler was born in Coventry but spent much of her childhood in Ireland. She worked as a newspaper reporter and then as a television news correspondent for twenty years, spending nearly a decade on GMTV followed by stints with ITN and BBC News. During that time, she covered major stories around the world including the Kosovo crisis, the impeachment of President Clinton, the Asian tsunami, famine in Ethiopia, the Soham murders and the disappearance of Madeleine McCann. Jackie now divides her time between crime writing and working as a presenter on shopping channel QVC. She has a degree in zoology from Trinity College Dublin, runs long distances for fun and lives in Gloucestershire with her husband.www.jackiekabler.comTwitter @jackiekablerInstagram @officialjackiekabler

”'Filled with suspense, intrigue and a cast of engaging characters, I devoured The Happy Family in two sittings. Fabulous!” - Lucy Clarke, author of The Castaways

”'An intriguing and gripping psychological thriller that keeps you guessing as you frantically turn the pages” - Sunday Times bestselling author C. L. Taylor

”'This is a psychological thriller that has everything: intrigue, mystery and constant twists and turns. I couldn't put it down!” - Alex Lake, bestselling author of Seven Days

”'There is no let-up in this twisty-turny thriller…Just when you think you've cracked its secrets, your expectations are upended again” - Kate Riordan, author of The Heatwave

”'This has all the ingredients of a classic psychological suspense - suspicion, secrets and shocking reveals. Another great read from Jackie Kabler!” - Sarah Linley, author of The Trip

'Couldn't turn the pages fast enough! I don't often stay up all night reading, but Jackie did it to me again. Twisty with a killer finish!' Tess Stimson, author of Stolen -

”'It’s impossible not to be drawn into the simmering, sinister uncertainty of this fabulous page-turner” - Sarah Steele, author of The Missing Pieces of Nancy Moon