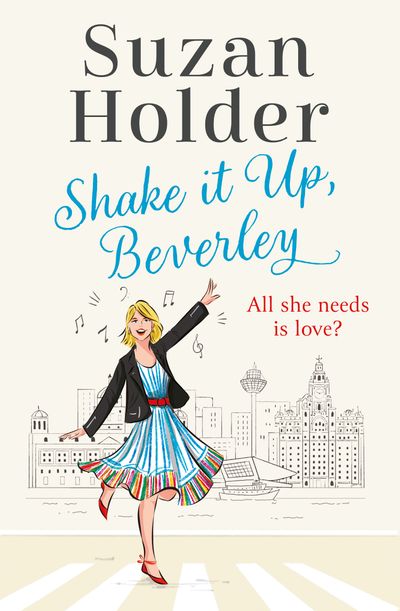 ‘A romcom that speaks to me – a single woman in her forties who still has a rock-chick streak!’ Woman & Home

The perfect, laugh out loud read for fans of Milly Johnson, Cathy Bramley and Jill Mansell!

‘I cannot wait to see what comes next from this talented author…a wonderful, heartwarming story that is an absolute must read’ Andrea

‘The fact she’s willing to step outside her comfort zone into the world of internet dating deserves a round of applause. Good on you Bev!’ Caroline

Author: Suzan Holder
Format: Paperback
Release Date: 14 Apr 2022
Pages: 352
ISBN: 978-0-00-852208-7
Suzan trained as a newspaper journalist and worked on regional and national newspapers before moving into TV production. She worked on a variety of television news and lifestyle programmes and was Series Producer of ITV’s network daytime talk show Loose Women. Married to musician, actor and presenter Noddy Holder, Suzan has one son, two step-daughters and two step-grandchildren. She loves music, dancing, dirty martinis and clunky (rather than kinky) boots. Suzan has written for newspapers, television and theatre and is now thrilled to have written her debut novel Shake It Up, Beverley for One More Chapter; a romantic comedy about Beatles fan Beverley and her internet dating adventures. The book is adapted from Suzan’s original stage play Shake It Up Baby which has been performed around the UK and was scheduled for a major theatre tour prior to the pandemic. Suzan is planning to reinstate the tour as the theatre world returns to normal.

‘Funny, moving, romantic and down to earth - this is a book that says the Beatles were right and sometimes all you need is love’David Quantick, screenwriter of the movie BOOK OF LOVE, starring Sam Claflin -