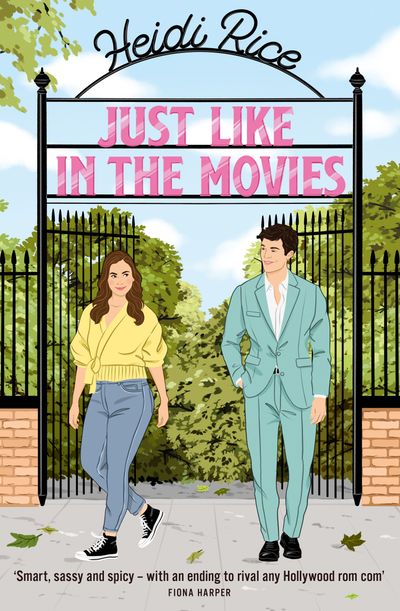 ‘Smart, sassy and spicy – with an ending to rival any Hollywood rom com…Totally recommended!’ Fiona Harper

The late Matty Devlin was so much more than Ruby Graham’s boss. He was her best friend, her father-figure, and she is showcasing a series of his favourite classic movies at the independent cinema in Notting Hill which was his life’s work … and of which she is now part owner.

Matty left the other half of The Royale to his nephew, Luke,the elusive Manhattan property developer and rumoured son of a Hollywood icon.

It’s all beginning to sound like the plot of one of Ruby’s beloved films until it becomes clear Luke is no more interested in swooping in to save the crumbling Royale than he is in talking about his famous father. He’s bad-tempered, cynical, and he couldn’t care less about the cinema!

But saving The Royale is about far more than just Matty’s legacy. The Royale is the only place where Ruby gets to live in a world of dreams and happy endings, a place where there are no lost causes, and where falling in love is just like in the movies … or is Luke about to change all that?

‘The characters are where Heidi Rice shines, every one of them is a unique and eclectic combination of traits…deserves to be read and loved by many’ Laura

Author: Heidi Rice
Format: ebook
Release Date: 12 Mar 2021
Pages: None
ISBN: 978-0-00-837257-6
USA Today bestselling author Heidi Rice used to work as a film journalist until she found a new dream job writing romance for Harlequin in 2007. She adores getting swept up in a world of high emotions, sensual excitement, funny feisty women, sexy tortured men and glamourous locations where laundry doesn\'t exist. She lives in London, England with her husband, two sons and lots of other gorgeous men who exist entirely in her imagination (unlike the laundry, unfortunately!)