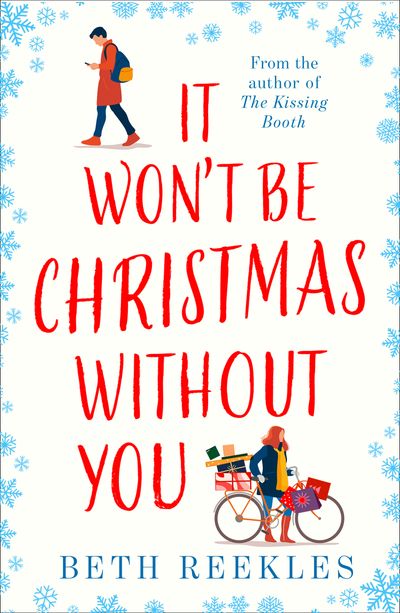 It Won’t be Christmas Without You

From the author of the smash hit Netflix romcom The Kissing Booth!

Eloise, a self-confessed Christmas obsessive, can’t wait for the big day. Devoted to her Michael Bublé playlist, she’s organising the school nativity play and even her gorgeous Grinch of a neighbour, James, can’t get her down.

Her workaholic twin sister, Cara, on the other hand, plans to work over the holiday – and figure out what secrets her seemingly-perfect boyfriend George might be keeping from her.

The sisters used to be close but since Cara moved to London, everything’s been different. Only, Eloise isn’t giving up just yet, and with a white Christmas on the cards, Cara can’t fail to be moved by the magic of the season … can she?

Author: Beth Reekles
Format: ebook
Release Date: 30 Aug 2019
Pages: None
ISBN: 978-0-00-835448-0
Beth Reekles is the author behind the 2018 Netflix smash hit movie, The Kissing Booth.Beth wrote The Kissing Booth when she was fifteen and began uploading it to story-sharing platform Wattpad, where it accumulated over 19 million reads. She was signed by Random House UK at the age of seventeen, and offered a three-book deal whilst studying for her A Levels.Beth is still writing and regularly blogs about writing advice and being a twenty-something. She has been shortlisted for the Women of the Future Young Star Award 2013, the Romantic Novel of the Year Awards 2014, and the Queen of Teen Awards 2014. She was named one of Time magazine’s 16 Most Influential Teenagers 2013, and in August 2014 she was listed in The Times at No.6 on their \'Top 20 under 25\' list.It Won’t Be Christmas Without You is her first adult fiction novel.