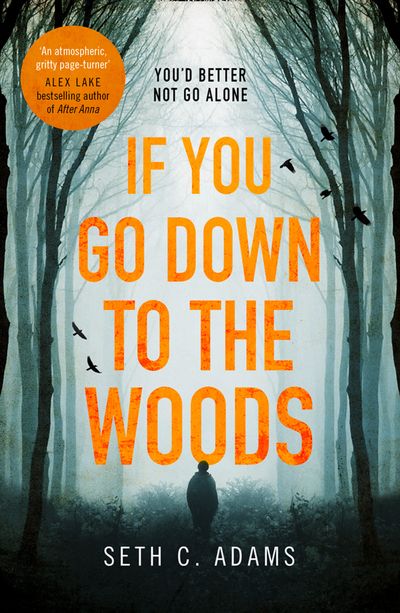 If You Go Down to the Woods

A powerful and emotional debut thriller perfect for fans of It by Stephen King, The Chalk Man by C. J. Tudor and the TV show Stranger Things.

We were so young when it all happened. Just 13-years-old, making the most of the long, hot, lazy days of summer, thinking we had the world at our feet. That was us – me, Fat Bobby, Jim and Tara – the four members of the Outsiders’ Club.

The day we found a burnt-out car in the woods was the day everything changed. Cold, hard cash in the front seat and a body in the trunk… it started out as a mystery we were desperate to solve.

Then, the Collector arrived. He knew we had found his secret. And suddenly, our summer of innocence turned into the stuff of nightmares.

Nothing would ever be the same again…

Author: Seth C. Adams
Format: Paperback
Release Date: 26 Jul 2018
Pages: 288
ISBN: 978-0-00-828025-3
Raised on Marvel comics, horror fiction, The Twilight Zone, and other genre entertainment unsuitable for an impressionable young mind, Seth C. Adams knew he wanted to tell stories at a young age. With a Bachelor\'s in anthropology from the University of California, Riverside, and completing his Master\'s in North American History at Arizona State University, as an adult he\'s learned that real life is indeed often stranger–and more frightening–than fiction. He currently splits his time between California and Arizona, and is always working on, or thinking about, his next story.

”'By turns gripping, macabre and terrifying, this is an atmospheric, gritty page-turner” - Alex Lake, author of After Anna

”'I was immediately drawn into the world Seth C. Adams created because his writing is simply divine! There are plenty of thrills and spills to keep you on the edge of your seat, so buckle up! I went through every emotion reading this novel. I can’t wait to see what the author writes next” - Sam Carrington, author of Saving Sophie

”'Chilling and absorbing - a brilliant portrayal of how quickly situations can spiral out of control” - Phoebe Morgan, author of The Doll House

”'Dark, edgy, fast-paced and with echoes of Stand By Me, IT and Fargo, this chilling debut thriller will stay with you long after the final page” - Michael Wood, author of the DCI Matilda Darke series

”'Compelling and pacy - I found it impossible to put down!” - Amanda Brittany, author of Her Last Lie