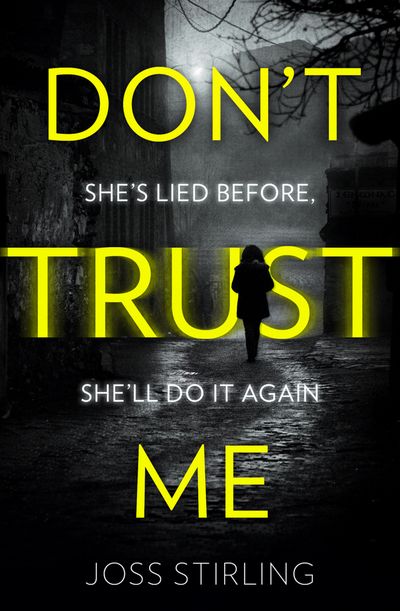 Does Jessica know what the truth is?

A stunning psychological debut with a shocking twist

When she arrives at work to discover every trace of the company she was working for has disappeared, Jessica’s life spirals into freefall.

Her romance with Michael, a celebrated criminologist is already in trouble. He is sick of the unpredictable behaviour caused by her ADHD and is convinced she is a fantasist. When his flat is burgled and precious belongings that remind him of his dead wife are stolen, he blames her.

Forced to prove her innocence, Jessica sets out to unravel the events of the last few months. But when she stumbles on a dead body, the lies, deceptions and betrayals that have dogged her whole life come back to haunt her.

Can anybody trust her?

Author: Joss Stirling
Format: Paperback
Release Date: 17 May 2018
Pages: 416
ISBN: 978-0-00-827865-6
Joss was born on the borders of East London and Essex. Leaving Essex behind for Cambridge, she went on to have careers in British diplomacy, as a policy adviser for Oxfam and along the way gained a doctorate in English Literature from Oxford University. More recently she has written for children and young adults, winning awards in both categories. She has published over fifty novels that have been translated into many languages. She lives in Oxford. Don’t Trust Me is her debut novel for adults.

”'A page turning read with a difference” - 5* Amazon reviewer

”'This was a fantastic debut, I will be keeping my eyes open for the next book by Joss Stirling” - 5* Amazon reviewer

”'I was captivated from the start” - Kirstie Marie Hill, Netgalley reviewer