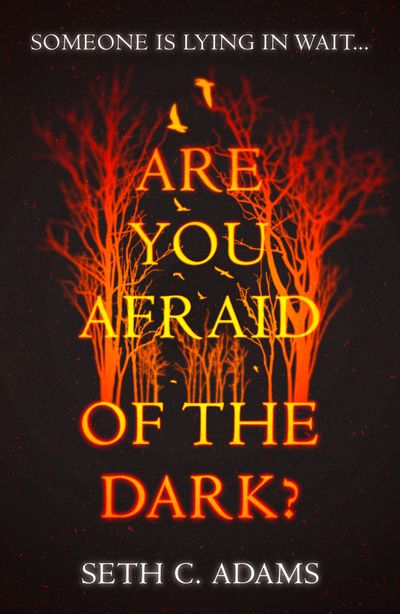 Are You Afraid of the Dark?

You never know what’s lurking out of sight…

Dealing with the tragic death of his father, 14-year-old Reggie finds the isolation of the woods near his house comforting. Until one day, a man – stumbling, bleeding, clearly distressed – emerges from the shadows.

Reggie hides the man in his treehouse, and helps the stranger recover. Each with stories to share, soon the pair form a strange friendship.

But then Reggie learns that his new friend is a ruthless contract killer. And when the killer decides to make a break over the Mexican border, with law enforcement in hot pursuit, Reggie must decide whether to honor the bond with his newfound father figure, or betray it and bring a brutal murderer to justice…

A powerful, emotional, thrilling rollercoaster of a read from the author of If You Go Down to the Woods

Author: Seth C. Adams
Format: Paperback
Release Date: 31 Oct 2019
Pages: 336
ISBN: 978-0-00-834768-0
Raised on Marvel comics, horror fiction, The Twilight Zone, and other genre entertainment unsuitable for an impressionable young mind, Seth C. Adams knew he wanted to tell stories at a young age. With a Bachelor\'s in anthropology from the University of California, Riverside, and completing his Master\'s in North American History at Arizona State University, as an adult he\'s learned that real life is indeed often stranger–and more frightening–than fiction. He currently splits his time between California and Arizona, and is always working on, or thinking about, his next story.

”'By turns gripping, macabre and terrifying, this is an atmospheric, gritty page-turner” - Alex Lake, author of After Anna

”'I was immediately drawn into the world Seth C. Adams created because his writing is simply divine! There are plenty of thrills and spills to keep you on the edge of your seat, so buckle up! I went through every emotion reading this novel. I can’t wait to see what the author writes next” - Sam Carrington, author of Saving Sophie

”'Chilling and absorbing - a brilliant portrayal of how quickly situations can spiral out of control” - Phoebe Morgan, author of The Doll House

”'Dark, edgy, fast-paced and with echoes of Stand By Me, IT and Fargo, this chilling debut thriller will stay with you long after the final page” - Michael Wood, author of the DCI Matilda Darke series

”'Compelling and pacy - I found it impossible to put down!” - Amanda Brittany, author of Her Last Lie