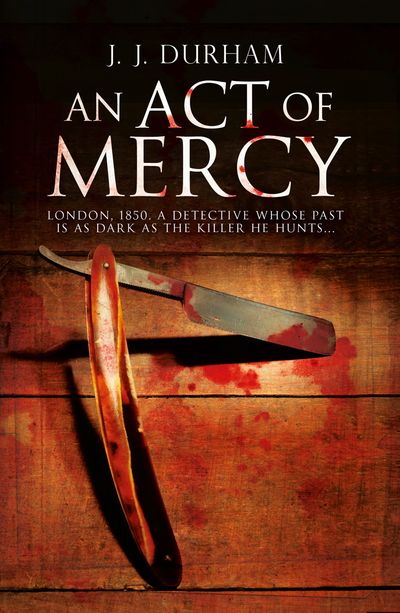 An Act of Mercy

London 1850. A city of contrasts. Of scientific marvels, poverty, disease and death.

When Detective Sergeant Harry Pilgrim (one of London’s first police detectives) discovers the corpse of a woman in a Hackney cab, the case seems straightforward – until the only suspect is found murdered in his cell.

Pilgrim is hindered in his investigation by his own dark past – a dead son and a missing wife – and also by the well-meaning interference of Charles Dickens, who is serialising Pilgrim’s adventures in his journal ‘Household Words’.

The case turns into a deadly game of cat and mouse. But who is the cat and who the mouse?

Author: J. J. Durham
Format: Paperback
Release Date: 04 Jun 2015
Pages: 296
ISBN: 978-0-00-813277-4
J. J. Durham was born in a pit village in the NE of England and grew up in a caravan stuffed full of books, cutting her literary teeth on the great storytellers of the 60\'s and 70\'s – Wilbur Smith, Frank Yerby, Mary Renault, Sergeanne Golon, and Lance Horner. She has a degree in English Literature, and has published two previous novels. An Act of Mercy is her first historical crime novel, and it features pioneering Victorian detective Harry Pilgrim.J. J. Durham lives just outside Edinburgh with her husband, three kids, and a skinny dog.