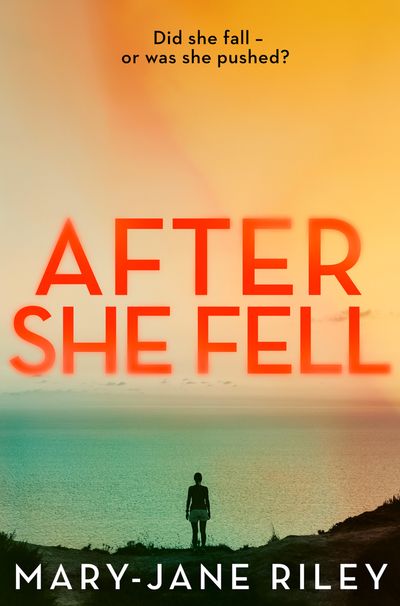 The second book in the darkly compelling psychological thriller series, full of twists and turns, perfect for fans of AFTER ANNA, HE SAID/SHE SAID and AFTER I’VE GONE.

There are so many ways to fall…

Catriona needs help. Her seventeen-year-old daughter Elena was found dead at the bottom of a cliff near her boarding school. The death has been ruled a suicide, but Catriona isn’t convinced.

When her old friend, journalist Alex Devlin, arrives in Hallow’s Edge to investigate, she quickly finds that life at private boarding school The Drift isn’t as idyllic as the bucolic setting might suggest.

Amidst a culture of drug-taking, bullying and tension between school and village, no one is quite who they seem to be, and there are several people who might have wanted Elena to fall…

Author: Mary-Jane Riley
Format: Paperback
Release Date: 28 Feb 2017
Pages: 332
ISBN: 978-0-00-818110-9
Mary-Jane Riley spent many years as a BBC journalist and talk show broadcaster, covering some of the darker stories of the last decade, including the Suffolk prostitute murders, the Cambridgeshire serial killer Joanna Dennehy and Operation Endeavour, the police operation to trap illegal gangmasters in the Fens. She has had short stories published in women’s magazines, including Bella, Women’s Weekly and That’s Life. Mary-Jane Riley is married with three children and lives in rural Suffolk. After She Fell is her second novel.

”A brilliant debut novel … The complex, fascinating plot winds between two time zones as the heroine seeks to uncover the cause of a terrible family tragedy. Riley’s real gift lies in her creation of one hundred percent real characters” - Kate Rhodes, author of RIVER OF SOULS

”'A dark tale set in a familiar world. Riley's characters are unexpected and yet completely believable and this sinister and twisty tale will definitely stay with the reader for a long time.” - Valentina Giambanco, author of THE GIFT OF DARKNESS

”This book is brilliant … a read to be devoured. A twisty tale with a tense psychological plot … fresh, original and thrilling” - Tracy Shepherd, Postcard Reviews.