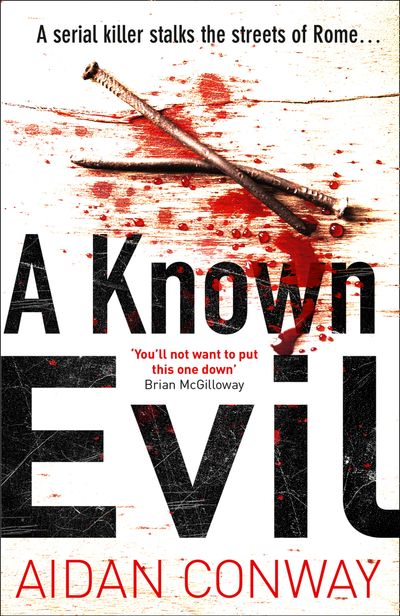 A serial killer stalks the streets of Rome…

A gripping debut crime novel and the first in a groundbreaking series, from a new star in British crime fiction. Perfect for fans of Ian Rankin.

‘An intelligent, taut, stunner of a debut … Twists and turns aplenty in this complex, cleverly plotted crime thriller’ Deborah Masson

A city on lockdown.
In the depths of a freakish winter, Rome is being torn apart by a serial killer dubbed The Carpenter intent on spreading fear and violence. Soon another woman is murdered – hammered to death and left with a cryptic message nailed to her chest.

A detective in danger.
Maverick Detective Inspectors Rossi and Carrara are assigned to the investigation. But when Rossi’s girlfriend is attacked – left in a coma in hospital – he becomes the killer’s new obsession and his own past hurtles back to haunt him.

A killer out of control.
As the body count rises, with one perfect murder on the heels of another, the case begins to spiral out of control. In a city wracked by corruption and paranoia, the question is: how much is Rossi willing to sacrifice to get to the truth?

Author: Aidan Conway
Format: ebook
Release Date: 02 Mar 2018
Pages: None
ISBN: 978-0-00-828116-8
Aidan Conway was born in Birmingham to Irish Parents and has been living in Italy since 2001. He holds an MA in Irish Writing from Queen’s University Belfast and has been a bookseller, a proofreader, a language consultant, as well as a freelance teacher, translator, and editor for the United Nations FAO. He is currently an assistant university lecturer in Rome, where he lives with his family. A Known Evil is his first novel.

”'A brilliantly dark crime debut dripping with menace and atmosphere. You'll not want to put this one down” - Brian McGilloway

”'A rapidly unfolding corruption plot in an exquisite setting” - Rachel Sargeant, author of The Perfect Neighbours